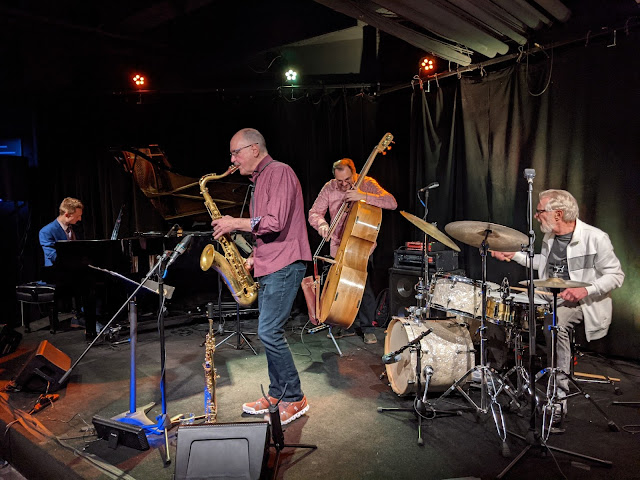 Hey, friends! In case you missed mention of it last week -- Kenny Horst and his quartet are back, returning to KJ's Hideaway, leading a quartet for a great night of music on Thursday, February 10th.

Kenny Horst has toured with Mose Allison, Al Hirt, Bobby Lyle, and so many others. In the early 1980s he started booking acts for the Artists' Quarter, a tiny little jazz club in South Minneapolis. After that location closed, Kenny re-opened it in St. Paul in 1995, first at 5th and Jackson, then later in the Hamm Building, where he kept the beat as the house drummer, playing with multiple giants of jazz and just about every great local jazz musician more that once.

An alumni of Betty Carter’s Jazz Ahead and of the Steans Music Institute, pianist Will Kjeer is an amazing musician and composer and has shared the stage with many world-class performers including Dave King, Jerry Bergonzi, and Adam Nussbaum.

Bassist Chris Bates has performed on over 30 albums, led the quintet Red 5, is a member of the Atlantis Quartet, has appeared on the albums Cognitive Dissonance and Taller Tales in this past year, and he has been known both to play with pianist Bill Carrothers and make bad puns.

A saxophonist, flutist, clarinetist, composer, arranger and educator, Pete Whitman performs in a wide range of musical styles and contexts that include Jazz, Classical, Pop, dance bands and more. He has played with Jack McDuff, Curtis Fuller, the Woody Herman Orchestra, the JazzMN Orchestra, Andres Prado and is the leader of the Pete Whitman's X-tet.