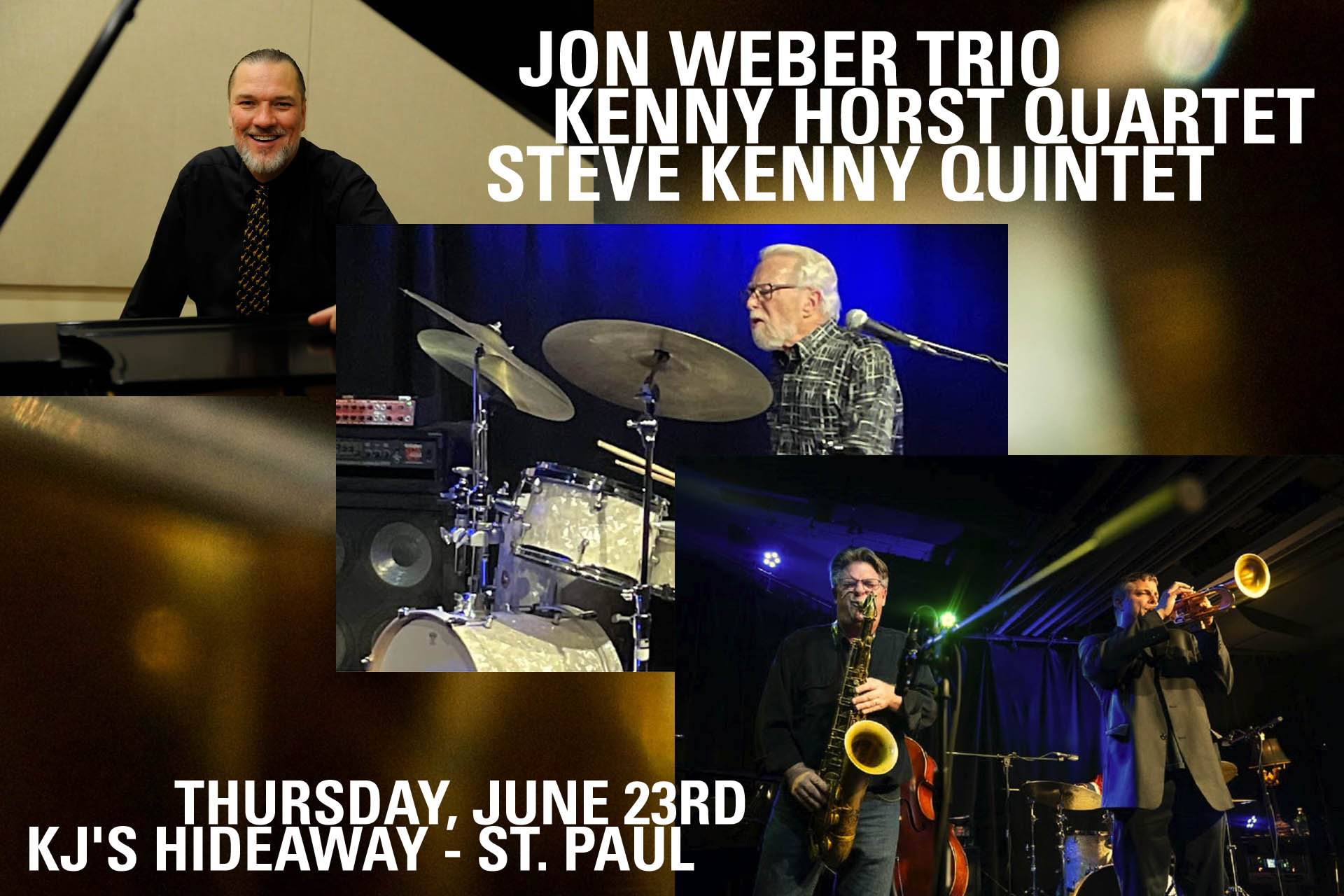 This Thursday, June 23rd come to KJ's Hideaway in downtown St. Paul to kick off the Twin Cities' Jazz Fest featuring three great bands for one cover! The fun starts at 6:30 pm with the Jon Weber Trio, continues at 8:00 pm with the Kenny Horst Quartet, followed by the Steve Kenny Quartet at 9:30 pm. Get your tickets here (or at the door, if they're not sold out).

At 6:30pm, it's the Jon Weber Trio with Jon Weber on piano, Gordon Johnson on bass and Phil Hey on drums. Jazz pianist Jon Weber has recorded and toured all over the world, winning numerous honors for performance and composition - scoring extensively for television since 1987. Gary Burton, Roy Hargrove, Niels-Henning Ørsted Pedersen and Avishai Cohen have all recorded Jon’s music, and his critically-acclaimed release, SIMPLE COMPLEX, rose to number one.

Next up at 8:00pm, it's the Kenny Horst Quartet with Aaron Hedenstrom on saxophones, Will Kjeer on piano, Billy Peterson on bass and, of course, Kenny Horst on drums. Drummer and one time club owner Kenny Horst has toured with Mose Allison, Al Hirt, Bobby Lyle and so many others. In the early 80's he started booking acts for the Artists' Quarter jazz club in its original Minneapolis location. Five years after that first AQ closed, Kenny re-opened the club as his own in downtown St. Paul, first at Fifth and Jackson, then later in the Hamm Building, where KJ's Hideaway is now. The AQ showcased many giants of jazz,  including Roy Haynes, Tom Harrel, Harry ‘Sweets’ Edison, Mose Allison, Lee Konitz, David Hazeltine, Eric Alexander, Jim Rotondi, Greg Skaff, and many more.

And last, but not least, starting at 9:30pm it's the Steve Kenny Quintet with Steve Kenny on trumpet, Dave Brattain on saxophones, Jordan Anderson on piano, Ted Olsen on bass, and Abinnet Berhanu on drums. Steve Kenny is active in the Minnesota Jazz community as a Performer, Composer, and Curator. Steve is a founding member of 'the illicit sextet', "Group 47", "What Would Monk Do?" and his own "Quartets", and he curates and produces a weekly Saturday Jazz series at kj's hideaway.  His latest recording, "Quartets", includes original compositions played by 4 separate ensembles of Twin Cities Jazz musicians, including a Live version of Steve Kenny's Ghost Suite. in 2019 the national Jazz Journalists Association named Steve as a "Minnesota Jazz Hero" for his work in the Jazz community and lifelong devotion to the Idiom.

These great bands are happening on Thursday at KJ's Hideaway in downtown St. Paul, in the lower level of the Hamm Building at 408 St. Peter Street. Visit their website for more information.