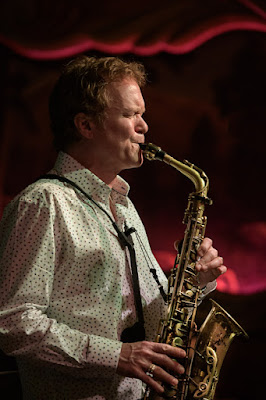 Happy holidays, everyone! Hope you're staying warm and doing well. Here's an upcoming event that we promised to tell you more about. Stay tuned if you're looking to make plans for something to do next week!

Born and raised in St. Paul, sax phenom Pat Mallinger has called Chicago home for many years -- returning every year to play a gig or two back in Minnesota during the holiday season. Pat has appeared on stage with the likes of Herbie Hancock, Ramsey Lewis and Stevie Wonder, among others. He also co-leads the band Sabertooth, which was the Green Mill's "resident wee-hours organ quartet" for a good long time.

Appearing with Pat in this version of the PMQ will be Will Kjeer on piano, Jeremy Boettcher on bass, and Kenny Horst on drums.

Pianist Will Kjeer is probably tired of people talking about his age; checking the AQ email newsletter archive, we've made an awful lot of callouts about his (young) age in the past. Let us move past that and point out that this amazing musician and composer is well loved and has shared the stage with many world-class performers including Dave King, Jerry Bergonzi, and Adam Nussbaum.

Once upon a time, drummer Kenny Horst toured with Mose Allison, Al Hirt, Bobby Lyle, and others. In the early 1980s he started booking acts for the Artists' Quarter, a tiny little jazz club in South Minneapolis. After that location closed, Kenny re-opened it in St. Paul in 1995, first at 5th and Jackson, then later in the Hamm Building, where he kept the beat as the house drummer, playing with multiple giants of jazz and just about every great local jazz musician one or more times.

The show is at KJ's Hideaway (what used to be the Artists' Quarter space in the Hamm Building) on Wednesday, December 29th at 9:00 pm. Get tickets here. KJ's Hideaway is located at 408 St. Peter Street in downtown St. Paul, MN.

Note: Proof of Vaccination or a Negative recent (72 hour) COVID test required for all attendees.

Hope to see you there, but even if not, thanks for your love for jazz!